2. Under previous rules when uke rolls over his back, a waza-ari would be given. Under the new rules it seems there is such a thing as a rolling ippon provided "there is no break during the landing".

3. Landing on the elbow or hands is counted as waza-ari (see below):

4. Bridging (on the back) by uke has long resulted in ippon. But in the past year, referees having been giving hansoku-make for uke landing on the front of his head. I guess you could call this a front bridge. Now it's official: front-bridging is hansoku-make (see below):

However, just because uke's head hits the mat doesn't mean it's automatically hansoku-make for uke. For throws like drop seoi-nage, drop sode and drop koshi-guruma, sometimes uke's head just hits the mat whether he likes it or not. In such cases, it's not hansoku-make (see below)

5. There is a type of osaekomi ocassionally seen whereby tori has both legs underneath uke. This used to be recognized as a legitimate hold-down. Not anymore. This is not osaekomi (see below):

6. Golden score can only be won by a technical score (waza-ari or ippon) or hansoku-make
This one is a bit vague but it seems that shido cannot win during Golden Score anymore. Only waza-ari, ippon and hansoku-make can decide a contest. If this interpretation is correct it means that during Golden Score, assuming both players have no scores and no shido, the match doesn't end even if someone gets one or two shidos. Only scores and hansoku-make count.

7. Not taking a classic grip will be penalized by shido if there is not an immediate attack
When the rules were revised after the 2016 Rio Olympics, it was initially decided that the refs would give more time for unconventional grips (e.g. cross grip) compared to before that where there needed to an immediate attack. Now, it seems to have reverted back to immediate attack for any grip that is deemed unconventional. The following grips all require "immediate" attack otherwise shido will be given. 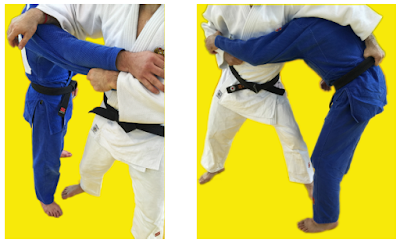 8. Leg grabs will be given shido each time.
When leg grabs were first banned, it resulted in immediate hansoku-make. After the 2016 Rio Olympics, the first leg grab is given shido and the second hansoku-make. Now, a leg grab is considered a normal shido infringement so you could theoretically infringe the no-leg-grab rule twice and still survive. The third time of course results in hansoku-make.  The following are all illegal and merit a shido each: 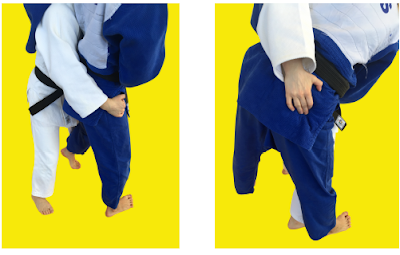 However, there are exceptions. The following are NOT considered leg grabs and are ALLOWED:

9. Strangles are often done with tori holding onto one of uke's legs. If that leg is stretched straight, a matte will be called.

10. Just because uke is on both knees doesn't mean it's newaza. If tori has grip control and attacks immediately, he can score. However, if there is a break in action, matte will be called.